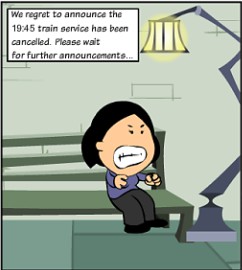 Normally I am one for travelling via train but some malevolent spirit must have looked down on me this morning and thought ‘I really need to shake things up’ because that can be the only explanation for my decision to travel by bus.
Of course, I have to get two buses to visit family in Uddingston because having one that ran straight through would be far too easy. However, I know what I am getting myself into… An all day ticket it is… I will be travelling back again after all.
So bus no.1 takes me to Glasgow City Centre … so far so good. With business concluded there I prepare myself for bus no.2 which will take me on to Uddingston. I wasn’t waiting for long when a red monstrosity shudders along. The driver zooms past just staring at me with that vacant expression that tells me I would get a better response from an amoeba. ‘Argggh!’ I yell. The old lady behind me agrees. ‘Ba***rd’ she mutters. I wait another 20 minutes and another comes along. Does he stop? no, of course he doesn’t. It is only then that I realize what the problem is. A Tree Removal Service truck complete with his trailer is parked in the stop and obviously parking in behind him would be too difficult for our conscientious bus drivers. Seriously? Of all the spots in the Glasgow City Centre to need tree removal! So I plod along to another stop and a bus no.2 finally stops and I’m on my way.
Is that the end of my nightmare? Of course it isn’t… I still have to get back home again.
After my visit I bid farewell to the family and hop onto bus no.3. The driver of which decides to tell me that my ticket is invalid because I crossed the boundary. None of the previous drivers thought to mention this little fact? It lucky that I am able to pay another fare because I hadn’t been to the ATM and had just left the shop where my niece was eyeing up a huge dinosaur toy. Luckily she had settled for sweets.
Back in the City Centre I need to change to bus no.4. I see the bus hurtling round the corner. I’m never one for speed but I could have given Usain Bolt a run for his money. I caught that bad boy. I relaxed in my chair. On my way home now? Nope! I’m heading along Pollockshaws road and it occurs to me… ‘I don’t live here’ . I finally reach Queen’s Park and I think again ‘I had better ask the driver’ ….”Are you going into the West End?” of course he wasn’t … he had already been to the west end before I got on and was now on his way to East Kilbride! I had been so busy running to catch it I hadn’t seen where he was going.
So off again and on bus no.5. I was reaching the end of my tether when two lovely young men sit beside me to keep me company. Then they asked me that question that even the most spiritual of us dreads to hear when we are trying to get home. “Have you found Jesus?”
I tried to explain that I was Catholic and happy with my path but they were having none of it. Got to admire their enthusiasm. Short of removing the biggest set of Rosary Beads from my bag they would not give up. Even the man in front swigging his cider was putting his opinion in. I’m not one to debate Theology. Maybe they knew better, maybe they didn’t…. All I knew was… next time… I was getting the bloody train!

Vivika Widow is the author of various thriller and horror books.

The Knock, Knock series is free to read HERE at Vivika Widow Online. Click HERE to check out other titles.